Why it's important to be honest on your insurance application 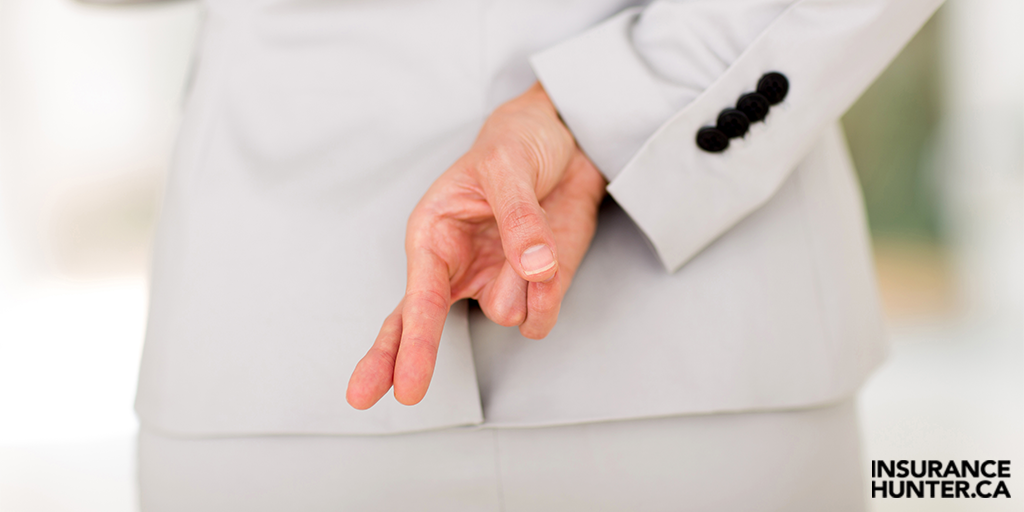 All of us are tempted to stretch the truth every now and then. It could be at work, when our bosses check in to see how close we are to finishing up a report. Or around the dinner table, after family members ask for feedback on the meals they've cooked. Sometimes the truth is uncomfortable. The little white lie—or, at least, a highly sugar-coated truth—does have its moments of usefulness.

An insurance application is not one of them.

If you're thinking even the slightest bit about lying on an insurance application—home, auto, life, etc.—just shut that thought down immediately. You'd probably be better off not filling it out at all. Here's why.

Lying could void coverage later on

Let's say you've lied a little on your auto insurance application. You told the company that it's only you and your spouse that drive a particular car in the household, when in fact, one of your children is drives the exact same car too. One day that child gets into an accident while driving. What happens next?

Had that child's car use been disclosed properly, then nothing out of the ordinary would take place. Police would be called, information would be exchanged, and a claim would immediately be filed. Most of the damages would probably be covered after a deductible had been paid.

The chances of that last part happening basically go out the window the moment the policyholder(s) lie on the application. Being in the business of risk and all, insurers are acutely aware of their own risk levels and want to minimize them as much as possible. Giving leeway for clients to get away with not disclosing things is a bona fide way to expand risk and lose money when claims come in. Thus, many insurers will include clauses in their client agreements that void coverage when pertinent information has been altered or omitted.

If there's an emergency and dishonesty on an insurance application has resulted in voided coverage, it's not just an embarrassing misstep—it's a matter of grave financial importance. Such lies are generally only uncovered in emergencies, and emergencies generally imply that a lot of damage will have to be paid for; be it property, medical, or liability.

Not having insurance—which is what happens when coverage is voided—means that such compensation will have to be made in some way that doesn't involve filing a claim and having it be taken care of. It means that a person's most valuable assets in life, such as homes, vehicles, jewellery, and whatever else may be in his or her possession, may have to be renounced in order to cover the damage that was done.

That's a steep price to pay for lying on an application. But it's a reality that must be faced when someone gets smacked with the price tag for collision damage, or basement flooding, or any other type of unforeseen issue that could have been handled with insurance.

Eroding trust and getting rejected

People don't take kindly to being lied to. Certainly not insurers. If they nail you for having lied on an application, they may go farther than simply voiding your coverage in the claim situation—they could cancel it entirely and reject any attempt to have it reinstated.

On one hand, this could sound like a pretty mild penalty. After all, there are plenty of insurers out there. Getting rejected from one is hardly the devastating from an availability standpoint. However, even if a new insurer doesn't find out explicitly about your dishonest application, it still may frown up on your switching. Lots of insurers offer discounts if you have demonstrated loyalty for an extended period of time—even if it was with some other company. Having coverage terminated and not being insured for even a short period is a bad look for a potential client.

What was written above still applies here: if you're going to lie on an application, you'd probably be better off not filling it out at all. Why go chasing a discount when it exposes you to the risk of paying something exorbitantly greater? Why pay insurance in the first place if you're comfortable with that sort of arrangement? (In fairness it is mandatory for drivers and many homeowners).

There just isn't much rationale for feeding falsehoods down the mouth of your insurer. In this case, honesty—both figuratively and literally—is the best policy.