Tesla owner gets chip implanted in hand to unlock car 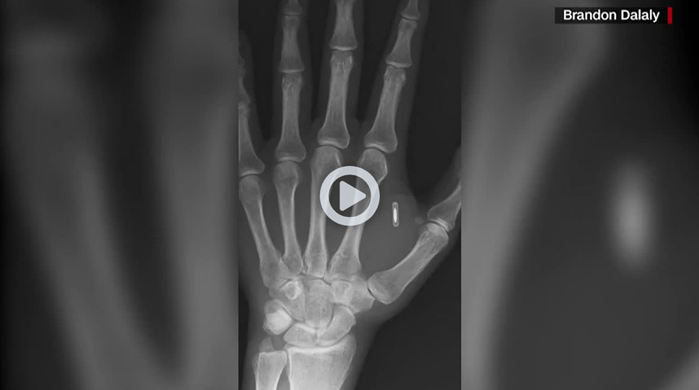 A Detroit man will never have to worry about forgetting his car keys again.

Brandon Dalaly had a chip permanently implanted in his right hand for his Tesla. The chip unlocks and starts his vehicle.

“You can’t lose your hand, so you’ll always have a way of getting in your car,” he told Detroit’s Fox 2 news.

The procedure, which cost the tech enthusiast $400US, replaces the vehicle’s key card. It was done under local anesthetic at a tattoo and piercing parlour. They popped in the chip “similar to microchipping a dog.”

"The chips themselves are around $200 to $300 and the install is only about $100 because you can go to a local piercing shop who will agree to do the installation," Dalaly told Fox 2.

"All the programming and coding putting the apps on the chips - that's all done by me."

Dalaly recently uploaded a video to social media which shows him getting the chip implanted and then using it to unlock his car. It attracted the attention of many media outlets including CNN, a New Zealand news service and Teslarati, a California-based multi-platform media company and leading publisher of Tesla news.

The chip in his hand is contactless and covered in a biocompatible substance. Once implanted, the body encapsulates the chip with its own tissue. It uses the same type of communication that makes Apple Pay possible, according to media reports.

Ultimately, Dalaly is hoping his Tesla chip gets the attention of Tesla CEO Elon Musk.

"Now I use that as my key when my Bluetooth key fails, or I don't have my key card. You just use your hand," Dalaly said adding he's part of a group of about 100 people who are beta-testing the chips before they are released to the public.

This isn't the first chip he's had inserted into his hand. The one on his right opens the car door while the one in his left-hand holds the key to his house and stores his contact card, medical information, Covid-19 vaccination card and similar items. That one glows green, so you know the phone is reading it.

Dalaly said the chip can be scanned with any cell phone which then opens a portal where others can access the information.

“The idea was that I would have my house key in my left hand and my car key in my right hand. And then what’s really cool is when it’s approved, they can wirelessly activate the new chip I just got to do credit card transactions,” he told Teslarati. “I can link a credit card to it, and I can use it anywhere where there are tap-to-pay terminals.”

As for whether the chip can be accidentally used or accessed, he says it has a very short read range.

“You have to be within a few millimetres of the thing and realistically, hopefully, you’re not just walking through credit card terminals and brushing your hands against them during mid-transactions,” he told Teslarati.

Dalaly, meanwhile, wants another chip installed near the breast, this time to get instant temperature reads on his body

While he’s been mocked online as a Musk groupie, Dalaly said he really wants the chip to be updated so the implant works with credit cards.

“Getting a lot of comments saying, ‘What if someone comes after you and chops off your hand?’” Dalaly said.

Until then he’ll have to settle for unlocking his Tesla and starting it by waving his hand over the console.

What do insurers think of this new technology? Only time will tell.

Who's at fault when autonomous cars kill?