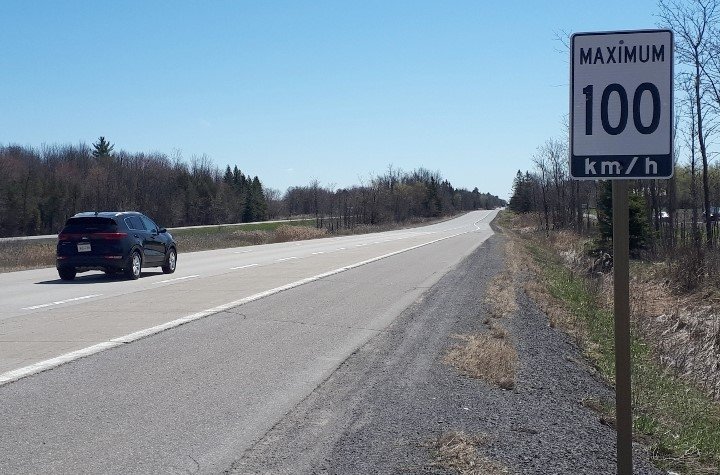 The Ford government, looking at ways to get people moving quicker across the province, recently announced a pilot project to review speed limits on 400 series highways.

On May 10, Transportation Minister Jeff Yurek announced the pilot project will be launched on three highway segments in mid-September, raising the speed limit to 110 km/h. The project will include Highway 402 from London to Sarnia, the QEW from St. Catharines to Hamilton and Highway 417 from Ottawa to the Quebec Border. An additional stretch of highway in Northern Ontario that has not yet been identified will also be part of the program.

This initiative is part of new legislation introduced at Queen’s Park called Getting Ontario Moving.

“Our government believes that increasing speed limits will bring posted limits in line with other jurisdictions and go along with how people currently are driving,” he said, according to The Canadian Press. “The pilot is a first step as a move forward to gather information for a permanent decision.”

Yurek said the province's street-racing rules -- which apply at speeds greater than 150 km/h -- will remain the same.

The minister said he doesn't think increasing the speed limit will encourage drivers to boost their speed beyond the posted limit, but police will be watching for dangerous drivers.

“Law enforcement have the tools, and we’re going to be supportive of them then enforcing the proper speed limits,” he said.

The Ontario Association of Chiefs of Police has said they are eager to participate in the government’s consultations, noting that raising limits has to keep public safety, not driver convenience, top of mind.

Earlier in the month, Yurek told the Toronto Region Board of Trade that the limits were set years ago. The transportation minister even mused some of those roads can safely handle traffic at 120 km/h. With safer, more fuel-efficient vehicles and changes to road design, some say current speed limits are behind the times.

“If you look back on the history of why speed limits were set where they were, back in the ’70s, there was an energy crisis. In order to conserve fuel, they lowered the speed limits on our highway system and it stayed that way ever since," Yurek said at the time.

The current speed limit on the 400-series highways, including Highway 401 – part of which is considered the busiest highway in North America – is 100 km/h, while other provincial highways range between 80 and 90 km/h. Across Canada, maximum posted speed limits vary by province, from 90 km/h in Prince Edward Island to 110 km/h in B.C., Nova Scotia and elsewhere. Limits tend to be higher in the U.S.

But some fear such a change could echo an ill-fated British Columbia move that, according to B.C.’s transportation minister, sparked an “alarming” increase in serious crashes.

That province adjusted speed limits on 33 sections of highway following a months-long public consultation that showed widespread support for increasing limits. That included increases to 120 km/h – the highest permitted speeds in the country - on certain sections of divided, multi-lane highways.

British Columbia has since reduced many of those increases.

B.C. rolls back speed limits on some highways